90% of our profits
shared back to you
Each epoch that we minted a block, we will share back 90% of our 340 Ada fixed fee to all delegators, proportionally to the amount of Ada staked. We will do this until there is 5M Ada staked with us.
Your shared profits will be sent to you if it is at least 5 Ada. If lower than that, it will be counted towards the next epoch. Transaction fee will be deducted from Ada sent.
10% profits to
Fight Climate Change 🌱🌍
Each epoch that we minted a block, we will donate 10% of our profit to an environmental fund that we choose or we will let you vote. We will publish proof on our Twitter chanel.

Your rewards is not affected. It is taken from our profit, not yours.
Committed to operating
in the long run
A total of more than 1100 pools have retired. If a pool you're staking with retire, you will lose out on rewards you would have earned until you change pool.

STAY pool is committed to operating in the long run and will not retire, so you can just stake-and-forget. That's why our pool is named "Here To STAY".
Earn our
special $THANK coin
$THANK coin is a fun and cool way to say thanks in the Cardano Commulity. It has a name that speaks for itself, making it super easy to be adopted. Just send $THANK to anyone, and they'll know it's a thank. We believe blockchain is one of the most profound technological revolutions since the Internet, and Cardano is the one to give it mass adoption.

We're thrilled to be on this journey with you.
How to stake
with STAY pool:
Step 1: Get an official app
· Daedalus is a desktop app. It's the most secure and the easiest to use. It will download the whole blockchain to your computer.

· Yoroi is a mobile app. It doesn't download the blockchain, so you can start using it right away.

We recommend using Daedalus for long-term holding because it's the most secure wallet.
Download it at https://daedaluswallet.io

If you prefer a mobile app, download Yoroi at https://yoroi-wallet.com
Step 2: Create a wallet
· Follow instructions inside the app to create a new wallet. Make sure to keep your recovering words super safe and super secure.
· Daedalus will download the whole blockchain. Just leave it overnight.
Step 3: Send Ada to your wallet
· Click the "Receive" tab to get a receiving address.
· Send all Ada to that address.
You may want to try with a small amount of Ada first before sending all Ada.
Step 4: Delegate to STAY pool
IN DAEDALUS:
· Click the

icon on the left column.
· Click "Stake pools" tab.
· Type "here to stay" in the search field.
· Click on STAY pool.
· Click "Delegate to this pool". 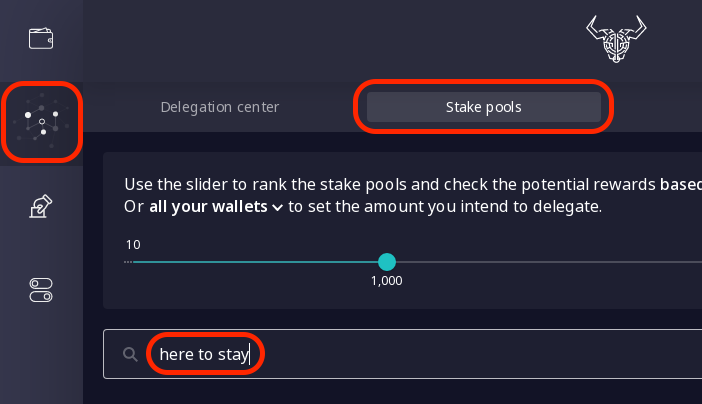 IN YOROI:
· Click the "Delegate" tab.
· Type "here to stay" in the search field.
· Under STAY pool, click "DELEGATE" button.
Five Facts
about staking:
Your Ada stays in your wallet and is not locked. You can send it anywhere, anytime.
You do not risk your Ada by staking.
You will receive your first rewards after 4 epochs (20 days). After that, you will receive rewards every epoch.
Your rewards are automatically staked. You don't have to withdraw rewards.
Any Ada sent to your wallet is automatically staked.
Why 4 epochs
before first rewards?
This is the same for all pools. The Cardano protocol takes a snapshot of your Ada balance and pool choice at the beginning of each epoch, then apply that in the next epoch.
Epoch 0: You start staking with STAY pool.

Epoch 1: The Cardano protocol remembers your Ada balance and pool choice at the beginning of this epoch.
For example: 10,000 Ada, STAY pool.

Epoch 3: Your rewards is calculated.

Epoch 4: Your rewards is paid to you.

Rewards calculations and payments are done automatically by the Cardano protocol. STAY pool has no influence on that.
You may ask...
Cardano vs Ada, what's the difference?
Cardano is the blockchain. Ada is the principal token (coin) in the Cardano blockchain.

They are named differently because Cardano supports multiple native tokens (like Thankcoin ☺️).
However, Ada is always needed for transactions.
What is Staking?
By staking you Ada, you contribute to the security of the Cardano system and earn rewards along the way.

Although not exactly, you can think of it as similar to earning interest from your money in your bank.
What is Delegating?
Staking Ada by yourself is a highly technical and complex task. It requires paying for servers, setting up core node and relay nodes, updating and monitoring them 24/7, and much more.

That's why you can just delegate your staking to a professional stake pool (like STAY pool ☺️).
What is Stake Pool?
Stake Pool is where many people stake together and share rewards proportionally to their Ada staked.

Pool Operator is the sleep-deprived one who takes all the hard work so everyone else can earn rewards.
What is Epoch?
An Epoch is 432000 seconds, or 5 days.
What is pool Fee?
Pool fee is one of the most misunderstood terms in Ada staking.
What it is:
· It is taken from the total rewards of the whole pool. That means it is divided among all delegators.
What it is not:
· It is not a "membership fee" that you have to pay.
· It is not taken from your Ada wallet.
What is pool Margin?
Pool margin is the percentage of the total rewards that a stake pool takes.
Example of pool Fee & Margin?
For example, let's say the total rewards of an epoch is 50000 Ada.
· First, we take the lowest possible fee, 340 Ada.
· Next, we take 1% from the remaining 49660 Ada, which is 496 Ada.
· The final 49163 Ada will be divided among all delegators, proportionally to their Ada staked.
How much Ada do I need to start staking?
You can start staking from 14 Ada, including deposit and transaction fee.
Do I have to pay to stake?
You'll need to deposit 2 Ada to start staking. This is the same for all pool.
STAY pool does not take this 2 Ada.
Do I have to send my Ada somewhere to stake?
No. Your Ada stays in your wallet.
Is my Ada locked?
No. You can send your Ada anywhere, anytime.
Do I have control of my Ada?
Yes. As long as you keep your Ada in a wallet and not on exchanges, you have full control of your Ada.
Do I need to stake my rewards?
No. All rewards is automatically staked.
Ticker
STAY
Pool ID
aa6dd7ae211c87f6cadd6031a641e224d00f49c5cb736a7a502d5056
Copy pool ID
Twitter
@stay_pool
Telegram
@staypool
Email
contact@stakepoolada.com